September 08, 2022 - The Club A Gogo is awarded a Blue Plaque by the City of Newcastle Upon Tyne. It has "Home of The Animals" on it.

January 29, 2021 - Hilton Valentine passed away peacefully in his sleep.

May 13, 2019 - The Animals are honoured in Newcastle with a Newcastle Local Heroes plaque on the Quayside by the Tyne Bridge! 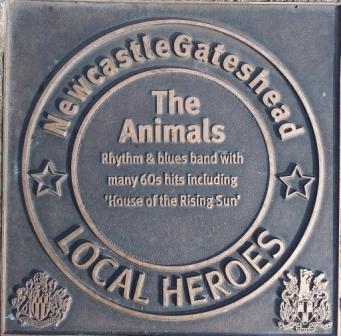 February 04, 2012 - The Animals will be getting some good exposure during the 2nd quarter of Super Bowl XLVI (46).  The Animals' song Don't Let Me Be Misunderstood will be featured in the H & M commercial for English footballer David Beckham's new line of underwear.  Watch the video on YouTube here

January 01, 2007 - Loads of cool Animals videos can be found on YouTube.com.  Here is just a small example

March 30, 2005 - More exposure for The Animals on "American Dreams"!  It's My Life made the soundtrack for the episode titled It's My Life.

March 09, 2005 - More exposure for The Animals on "American Dreams"!  Although portrayed by others, The Animals original recording of We Gotta Get Out Of This Place made the soundtrack for the episode titled Commencement.

Jan 30, 2005 - More exposure for The Animals on "American Dreams"!  Don't Bring Me Down made the soundtrack for the episode titled Starting Over.

Jan 23, 2005 - Prime Minister Tony Blair dropped everything on Thursday to allow cameras into Downing Street to reveal his favourite No 1 song was The Animals' House Of The Rising Sun. Mr. Blair told the 2.5 million Top Of The Pops viewers: "There have been so many great No 1s on Top Of The Pops, but the one I've chose in House Of The Rising Sun by The Animals because it is the first song I learned to play on the guitar." - taken from the English paper "The Mail On Sunday"

All of 2004 - The so-called Animals 40th Anniversary tour is not what you think.  People continue to write to us believing that Hilton Valentine is participating.  Apparently gigs are being advertised with this information.  THIS IS NOT THE CASE!  The drummer John Steel is the ONLY Animal that has anything to do with that. Hilton hasn't played with John since June 2001 and has no intention of doing so. Also, many of you are writing in to ask if Mickey Gallagher was an Animal.  He was not.  He served as a substitute only for about a week when Alan Price quit the band and they were waiting for Dave Rowberry to join up with them.

April 4, 2004 - More exposure for The Animals on "American Dreams"!  House Of The Rising Sun made the soundtrack (again) for the season's finale episode titled No Way Out.

June 6, 2003 - Animals keyboard player Dave Rowberry passed away in his home from a heart attack.

Dave,
Likeable, easy going, intelligent, great sense of humour
and a f*cking great keyboard player.
That's who you are and was glad I could share that with you.
I really enjoyed our time together, then and now.
Love,
Hilton

May 4, 2003 - More exposure for The Animals on "American Dreams"!  House Of The Rising Sun made the soundtrack for the episode titled, Down The Shore.

March 2, 2003 - The Animals are portrayed on the NBC series "American Dreams" Sunday the 2nd.  The episode was titled Act Of Contrition.  Watch for the repeat! Though they played the actual Animals recording of Boom Boom, they did not use any footage of The Animals appearing on American Bandstand.  This is unusual as every other artist I've seen being portrayed on that show (when showing them at Bandstand), they mixed it in with vintage footage of the actual artist.  They really need someone checking the historical details though.  They had the "Chas" and "Alan" guys in crewcuts!  Helloooo - British Invasion band here --- that's a clue to give the actors some more hair! And they had the "Hilton" guy playing a Rickenbacker.  He was using the Gretsch Tennessean when he was playing Boom Boom.  It was still pretty cool.  Oh, and for those of you who did catch it...... According to Hilton, Eric did NOT do that with the camera.   Also, on Sunday March 9th for the Past Imperfect episode, "Meg" & "Luke" state that The Animals are their favorite band!

Nov 2002 - There have been 941 Number One songs since the charts began and the company which compiles the weekly listing, The Official UK Charts Company, counted nearly 190,000 votes to draw up its list.

Darren Haynes, of The Official UK Charts Company, said: "This list of the nation's favourite songs once again shows the enduring appeal of classics such as Bohemian Rhapsody and Imagine."

Oct 2001 - www.HiltonValentine.com has been launched!  Hear MP3 audio clips for his current project.   The site is still under construction but will soon feature video clips as well as additional audio clips and many other goodies!

Interview with Hilton Valentine conducted 31, March 2001 by Digger of www.sixtiespop.com  Log onto his site to see interviews with other 60's British icons such as Andrew Loog Oldham, Eddie Phillips and Jim McCarty.  He also has a great interview with Sid Bernstein!

The Animals had a "reunion" of sorts for Eric's 60th birthday party May 11th & 12th at the El Rey Theatre in Hollywood CA.  Hilton Valentine, John Steel and Dave Rowberry were there along with many other musicians from Eric's career.  People came from all over the world (Japan, Australia, England, Canada, Germany, all over the U.S.....YOU NAME IT!) to witness this once in a lifetime opportunity!    See the photos!

Animal Tracks - The Story of The Animals: Newcastle's Rising Sons is the latest, most informative biography of the band by Sean Egan